54 When they heard these things, they were cut to the heart, and they gnashed on him with their teeth.

55 But he, being full of the Holy Ghost, looked up stedfastly into heaven, and saw the glory of God, and Jesus standing on the right hand of God,

56 And said, Behold, I see the heavens opened, and the Son of man standing on the right hand of God.

57 Then they cried out with a loud voice, and stopped their ears, and ran upon him with one accord,…

“cut to the heart”

“cried out with a loud voice”

Ever been hurt, frustrated, angered by someones words or actions? I’d say we have all been “cut to the heart”, Amen?

We all have a chapter in our story we wish we could rewrite. Someone was “cut to the heart”, someone “stopped their ears”, and likely, there was someone who “cried out with a loud voice”.

When our hearts are wounded our ears stop working.

Maybe there are some who are good at confrontation, anger management, communication… and this just doesn’t apply to them. I would say for the vast majority of us we can say at some point in our lives the hearing impairment of Stephens attackers has been our disability too. In fact, I would say we have all been on both sides at one time or another. We have stoned and we have been stoned.

When the story makes our hearts whence we like to turn the channel, and we’re pretty proud of ourselves too. I mean, we really did take the high road, right? There was a lot of things we would have liked to have said or done but we just physically or emotionally walked away.

She said they had differing opinions on what needed doing. While she was explaining her reason he turned and walked away. I would say his ears were failing him wouldn’t you? He may have felt he took the highroad but it sure didn’t look like it to anyone else.

How many relationships have been severed because someone failed to hear?

Who have we stoned in our church, our family, our home, because hearts were raw and hearing dulled?

Ouch! There are a few chapters I would like to rewrite. Thank you Jesus for your white out correction fluid. Amen?

I have failed others most when my heart was raw and my ears were dulled.

Here is some wisdom from my daughters third grade science book:

Because where there are sound waves there is movement.

And where there is movement there is change.

1.  A transformation or modification; alteration:

What if we placed our hand on them and felt their heart; the source of the sound?

We will likely need a lot less of His white out correction fluid. Amen?

One of my very favorite bloggers has hit the nail on the head again. He is a gifted writer and I adore his insights. When I read this post on Unshakable Hope I believed it needed to be shared.
I am so greatful to have found unshakable hope.com I hope his blog ministers to you also.

It seems that America is obsessed with comfort these days. Have you noticed all the mattress commercials? They all claim that their brand is the most comfortable and tell us that we need to replace our mattress every eight years to maintain that optimum comfort. One mattress store will even finance your mattress for eight years. (I don’t care how comfortable the mattress is, if you finance it, you’ll probably be up half the night worrying about making your mattress payment).

Don’t get me wrong, I’m probably more obsessed with finding physical comfort than most people. One of the most difficult things about being paralyzed by ALS is trying to get comfortable because my body is literally dead weight. There’s no turning over or even turning my head in order to get more comfortable when I go to bed. I recently got a new mattress, the one that I see…

48 And Jesus said to them, “Have you come out as against a robber, with swords and clubs to capture me? 49 Day after day I was with you in the temple teaching, and you did not seize me. But let the Scriptures be fulfilled.” 50 And they all left him and fled. 51 And a young man followed him, with nothing but a linen cloth about his body. And they seized him,52 but he left the linen cloth and ran away naked.
St. Mark 14:48-52
When all twelve of the disciples had bailed on Christ one young man followed. Anyone else been feeling like everyone’s bailing lately? Anyone feeling like the young man? Alone and vulnerable?

In the last few months I’ve been saddened over pastors I had admired and grown under throwing in the cloth for the flesh. A woman I had considered a mentor and another woman who leads children in praise music recently celebrated the supreme courts decision on social media.

I’ve sat in an arena with thousands of people while the lead singer of a popular contemporary christian band told the crowd we are boxing Gods grace in when we decide that sin matters. I hoped he had misspoken but when that band was the entertainment for a major women’s conference a few months later I got to listen to the same speech word for word again.

I’ve watched some who lead our children’s ministries decide their marriage is optional.

So now our choice is this. Do we drop the cloth and run away now? Do we decide that because someone we love would be offended or because insurance is expensive or because our bank account would be more comfortable that we are willing to bail on Christ? Here’s the thing, the young man escaped with his life but not his dignity. We may keep our dignity but lose life.

For this reason God will send upon them a deluding influence so that they will believe what is false, in order that they all may be judged who did not believe the truth, but took pleasure in wickedness. 2 Thessalonians 2:11-12 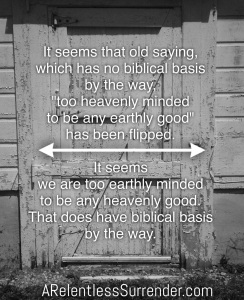