But when they saw him walking upon the sea, they supposed it had been a spirit, and cried out:

For they all saw him, and were troubled. And immediately he talked with them, and saith unto them, Be of good cheer: it is I; be not afraid.

And he went up unto them into the ship; and the wind ceased: and they were sore amazed in themselves beyond measure, and wondered.

For they considered not the miracle of the loaves: for their heart was hardened.

I am not the best host in the world. My introversion and need for privacy keeps me from opening my door as often as I would like. I know. It sounds like I don’t want to be hospitable because of my personality type, but that is not the case. I want to be that home that is always open and always has extra food for whoever may stagger in. The entire Bible is packed with examples of hospitality and that is what I aspire to do/be.

All of that aside my real post is about how those dingle berries didn’t notice the miracle of the loaves and fishes. I may not be the queen of hospitality but I know if I am serving five thousand, let me say that again. FIVE THOUSAND! I had better have a bit more than 5 loaves of bread and two fish.

For they considered not the miracle of the loaves: for their heart was hardened.

Makes me wonder what I have missed giving thanks for this week, this month, this life because my heart was too hard to see it.

Sunday we did have lunch with that queen of hospitality I mentioned above. While the men went out to start cranking the ice cream we ladies lingered. She told of how this year has been a gift, a much-needed calm after a couple tough years. Her heart tenderized by the pain, stress, and grief of death, illness and the many hats worn to hold it all together. She isn’t taking for granted the miracles.

You see, after the storm they realized what they had missed. At the sound of the cocks crow Peter remembered… In hindsight the disciples repeatedly realized the significant things Jesus had done and said. They noted the importance of all they had witnessed.

If the disciples can be dingle berries I am quite confident that I can and have been too. I just don’t want to wait until I am caught in the next storm to acknowledge that Jesus triumphantly walks on the very water I feel is taking me under.

Here’s to living with our hearts tender-ready, eyes wide open, and tongues boldly proclaiming the marvellous things He has done.

I guess you could say I have been on a bit of a hiatus. Life has been moving fast. I Have had a terribly sick little girl, my husband has injured his back and all of this makes for writing inspiration but does not make for writing time.

However, back in April I wrote a guest post for TheLaundryMoms.com and today is the big day. I hope you’ll swing over to https://www.thelaundrymoms.com, and check it out. They have such an amazing ministry, I just know you’re going to love them.

So while I am consumed with my first calling as wife and mom, I hope you bear with me and pray for me.

I’ll be back soon. In the meantime hop on over to https://www.thelaundrymoms.com. I would be honored if you would. 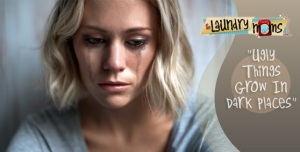 I hear it over and over from other moms. Ha! I feel it over and over. It’s like there is this silent gunshot that sends us mommies clawing at the ground to keep up and stay in the race.

I remember one day bent on overcoming my awkward silence, I determined to speak to as many other moms there that day as I could. Not a bashful “Hi”, but to really seek, speak, and sponsor friendship.

I left that day feeling diagnosed.

I left feeling like my brand of mothering wasn’t up to par.

I went in wanting to be real, make real friends, stop the competition and start a connection.

It seemed that every mom I spoke to that day was bent on being seen as the best. Nobody was interested in being real.

I  know community and fellowship is crucial.

Be sober, be vigilant; because your adversary the devil, as a roaring lion, walketh about, seeking whom he may devour. 1Peter 5:8

Lions run into the herd and try to separate one from the rest for an easy kill. Satan does that to us dear introverts. It is critical for us to have our time. We must make space for our own sanity, but we can not allow Satan to isolate us from other believers. Ask me how I know. Really that’s a post all in of itself.

So when Brittany said she was feeling lead to bring moms together to connect in a real way. I smiled and nodded and hoped they didn’t eat her alive.

I was feeling a bit too jaded to commit to joining her. “I’ll let her get the group going then if it feels safe I will join.”

Um, wrong! Basically what I did was join the race and leave her vulnerable in the dust after she had the courage to step out brave and call a timeout on this silly running in circles.

One worn momma this week said to me, “Something! I just want to have something together. Anything! But I have nothing. It’s all falling apart.” I said, “Mary lost her 12-year-old son, and God still said Mary is blessed and highly favored.”

I mean really, that story may have been preached at 100 different angles but it preaches to my heart in that if Mary could lose the Messiah and still be in God’s good graces, it’s ok to forfeit the race for grace.

It Is ok to forfeit the race for grace.

When she called me last week broken and battered by Satan. I searched my mind frantically to find words of wisdom. I came up empty and when I hung up the phone that day I felt I had really blown it. I told Josh all about it that night and he was right. He said, “most times people don’t need you to tell them how they can fix it. They don’t need great spiritual wisdom. They just need you to listen and pray.”

I remembered back to that day when I felt diagnosed. I didn’t go in and spill all my dirt or go in wanting or needing anyone’s help. I went in being me, and left feeling I needed fixing. I needed absolutely nobody to say, “Well, it’s good that you recognize that about yourself so that you can start the process of change.”

I mean, Christians are supposed to love people and I fret, dread and become ill just thinking about those get-together that EVERYONE in the whole wide world – but me – loves.

How did God call my husband to ministry knowing I’m socially awkward. If the domain name for A Relentless Surrender had been taken, that would have only left the other half of my testimony, Awkward Preachers Wife, for the blog title.

For YEARS I have prayed to become an extrovert, but God has said no. It’s only been recently that I have (on most days) learned to accept being who He says He made me to be, and that’s not always easy when others want to diagnose and fix you.

I didn’t know for sure how to start a group of women who could feel safe and be real.

Forfeit the race for grace. It’s as simple as that. 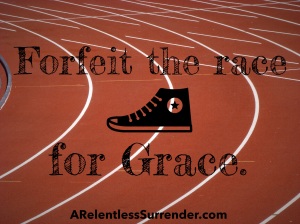