I know a vast majority of you will stop reading soon. I get it. Life’s short and the World Wide Web is vast. Before you hit the back button or click the little x, would you please do me the favor of scrolling through the pictures and pausing for a few seconds to look into the eyes of each. Then you can go on your way if you like.

By this all people will know that you are my disciples, if you have love for one another. John 13:35

On April 25 at 11:45 a.m., I was at the church, about to finish the prayer; we were sharing our prayer requests with each other. Suddenly, a horrific sound appeared and the church began jumping and shaking. At the same time it was dark, windy and a thunderstorm appeared. We were in panic and trembled.

I went to the Sunday school class where our children were praying to grab them and take them out of the church. I fell down and was not able to take them. I thought within a short time this would stop. But NO, It continued. It was almost like the whole building would collapse. Many believers started to pray loudly, screaming and crying.

We ran outside to the open space, there was huge panic and we saw with our own eyes many collapsed buildings, people were running here and there screaming. After 4 hours we prayed and departed. Some stayed, others went home.

Still we were unaware that this was one of the biggest and deadliest earthquakes in the history of this nation.

There was no electricity for four days. No phone calls, no internet connection, but from the evening of Tuesday April 28th, the situation started to change for the better.

The vibrating still continues. For the past three days, everyone has slept outside under plastic tents because of the fear from strong aftershocks. In fact, more than 106 aftershocks have been felt after the quake. It also rained, which made us more fearful and many people were saying we would sink. 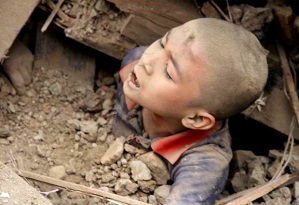 More than 7,040 people are known to have died, and there are fears that this number could double as officials dig through the debris. Over 8,000 were injured. More than 70,000 houses were destroyed.

98 hours after the earthquake, we all returned to our homes, because children started to get sick due to the cold, rain and mosquito bites.

Still hundreds of thousands of people are afraid to return to their houses and some are forced to live and spend these cold nights outside the tent because they have lost everything. They are living under plastic shelters.

World leaders and global charities have offered emergency aid to Nepal, as the government grapples with the scale of the disaster. But this help is never going to be enough. Thousands of survivors are desperately in need of food, water and shelter. “We are scared of the sickness and diseases that may spread because of the dead bodies everywhere.” 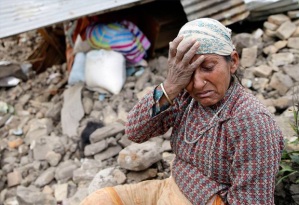 Your prayers and generosity make a powerful impact, now more than ever before! What a privilege we have to bring the HOPE and LOVE in Jesus name to those who have been affected by this horrific earthquake. That is why I am not ashamed to tell you that we need your support urgently because it is an emergency.

Whatever help would be appreciated much. Please pray, share, and give as the Lord leads.

Any amount will help!!! you can give at http://www.reachhimalaya.org/donate.php

Hope for the Hopeless
http://www.reachhimalaya.org

2 thoughts on “It Is Happening”