You may call it bursting a bubble but from here on out it is egg cracking to me.

Last Friday evening my children and I went to Grandma’s to help her with some yard work. While there, Hudson discovered a bird egg in the grass.

I told him what a neat find he had made and to be careful with it because whatever was inside was likely rotten and it would be gross to crack.

It will surprise nobody to know that it wasn’t long before he’d attracted the attention of both sisters and they all wanted the egg.

I was getting irritable and they were building nests. I was insisting they get rid of it before it got broken, they were insisting on incubating it.

Finally, over the bickering, I told them to say goodbye to the egg and get rid of it. They chose to bury it in the flowerbed we were working on, but, as predicted in the process the egg got broken. I insisted it was already dead. There was no way they could have mother it…

It’s common sense and simple science after all.

That night while soaking in the tub I was sorting my email and received a flattering comment on my blog. With excitement I forwarded it on to a special friend who is always encouraging and supportive. They replied with,”probably a robot.”

I reread it and it did seem to be a cookie cutter comment. I followed the link they had left. She was real. She was a doctor, and it did seem she was looking to direct hurting people to her website for counseling sessions.

As I lay there soaking in the tub and feeling foolish, I looked up and one of the children had drawn a picture on the wall with their tub crayons.

I lay there feeling ashamed for being so cross toward my whimsical children, and wallowing in my own feelings of gullibility.

Why do we feel the need to bring everyone back to reality. Is it really our job to keep them from getting hopes too high, dreams too big???

God brought to mind something I had said a week prior to a very special and dear friend.

She bore her heart to me and the ache of regret she had for a permanent decision she had made… She said with the sound of skepticism in her voice, “You know, friends say God can still change permanent things.” I agreed with her wholeheartedly, all the way down to the skepticism. I said, “He does, but this kind of miracle we are talking about is very rare.”

It’s common sense and simple science after all.

I hated the words as soon as they left my lips but figured I’d only make it worse by trying to fix them or giving her false hope for something she already told me she battles.

However, it continued to come into my thoughts, and, we know what God has to say about such people… having the appearance of godliness, but denying its power. Avoid such people. 2 Timothy 3:5

I have a phone call to make.

Somehow laying in the bath wallowing in my own cracked egg, I realized how maybe it’s not us being reasonable, but being fearful. Fear of believing God will show US favor. Fear of getting OUR hopes or THEIR hopes up. Maybe it isn’t common since that we have at all, but lack of faith. And maybe we are all just great big doubting Thomas’ who need to feel the scars to believe.

Is this why we are egg crackers?

Take away all their hope and no one gets hurt. That’s the lie of the century… And of the devil.

We serve a God who loves to awe us with the miraculous and woo us by defying reason.

Clearly the bird had never developed, but what would it have hurt? I remember nurturing an egg as a child.

Since when did it become our job to keep people rational or to keep God in a box?

Crack a persons egg = you putting God in a box.

Crack a persons egg = you declaring your lack of faith.

And you will feel secure, because there is hope; you will look around and take your rest in security.
Job 11:18

The egg is evidence there is still hope, and who do we think we are?

Maybe it isn’t just whimsy our kids have… Maybe, they have more faith than their “rational” parents.

By the way, I think God kinda likes whimsy. I mean, look around. 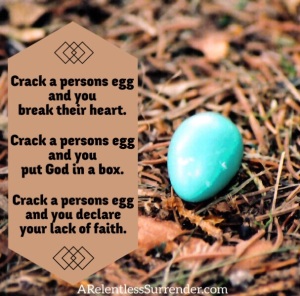 7 thoughts on “How to Keep on Believing”